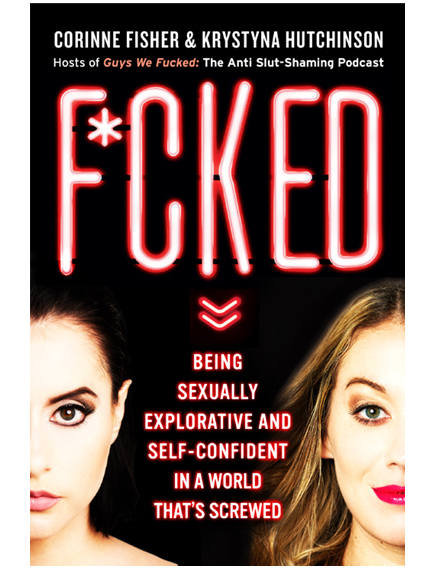 F*CKED: Being Sexually Explorative and Self-Confident in a World That’s Screwed

By Corinne Fisher and Krystyna Hutchinson

Comedians Corinne Fisher and Krystyna Hutchinson started Guys We F*cked: The Anti Slut-Shaming Podcast in 2013, intending to interview guys they’d slept with to learn more about themselves and squash the stigma so often associated with sexual women. As the podcast grew, and Corinne and Krystyna got to know their fans, stories of sexual assault, verbal and emotional abuse, and crippling shame became common topics of discussion along with those humorous conversations highlighting overall sexual confusion among many adults. The podcast is now an community of over a million listeners worldwide, and a place where any and all taboo sex topics are discussed freely, both with celebrity guests and the real people in their lives.

Their new book, F*cked, follows that model, as Corinne and Krystyna bring a mix of raw, ridiculous, and serious sexual conversation to the page that will include topics like:

Corinne and Krystyna are tired of books that pander to women like they’re hot messes, unable to handle their emotions without the assistance of a man, a glass of rosé, and a Xanax. This book will teach the reader, be they male, female, transgender or undecided, that you deal with sh*t, you brush your shoulder off, and you move the f*ck on. In a society where it has, for some reason, become chic to be the victim, they say this pity party ends now.

This is a guide to love and sex for women who drink whiskey because they like it, not because it’s a cute thing to say on your Tinder profile. It has no trigger warnings because life doesn’t come with those. It won’t talk down to you or coddle you because you’re better than that. Corinne and Krystyna aren’t going to explain why he’s just not that into you, because it doesn’t f*cking matter. Despite what television, Rom-Coms, and glossy magazines tell you, you’re fine all by yourself. This is the book Bridget Jones should’ve read instead of writing that sh*tty diary in the first place.