(the comedy duo of CORINNE FISHER & KRYSTYNA HUTCHINSON): Performing as a comedy duo since 2011, SORRY ABOUT LAST NIGHT is the brainchild of New York City-based stand-up comedians CORINNE FISHER & KRYSTYNA HUTCHINSON. Gritty, sexy, raunchy, silly and opinionated, FISHER and HUTCHINSON first started gaining local notoriety with their house party style live comedy shows at Gotham City Improv where they served jungle juice to packed theaters of twenty-somethings and provided them with a top-notch comedy show for a measly $6. Word of these shows spread quickly, forcing the show to move to larger venues where the ladies welcomed well-known comedy and music names such as HANNIBAL BURESS, KEVIN MEANEY, JAMIE LEE, MARK NORMAND, BIG JAY OAKERSON & DAN BERN. They are most known, however, for their wildly popular show GUYS WE FUCKED: THE ANTI SLUT-SHAMING PODCAST.

GUYS WE FUCKED is a weekly Luminary podcast during which CORINNE FISHER and KRYSTYNA HUTCHINSON interview men they’ve slept with and titans in the comedy and sex industry (i.e.: comedians JESSICA KIRSON, JANEANE GAROFALO, & MICHAEL CHE, porn star STOYA, sex advice guru DAN SAVAGE, actor FRAN DRESCHER, exoneree/author AMANDA KNOX & model/sex positivity advocate AMBER ROSE), discuss sexual taboos, and create a sex-positive environment for their million plus listeners worldwide. They have appeared on LAST CALL WITH CARSON DALY, have been interviewed for THE NEW YORK TIMES, CNN, VOGUE, MOTHER JONES, THE HUFFINGTON POST, SPLITSIDER & THE DAILY BEAST, and have been guest editors for GLAMOUR MAGAZINE. In 2016, the duo gave a TEDx talk called “HOW MUCH?” based on the value of our bodies and in 2017 they published a book with HarperCollins called FUCKED: Being Sexually Explorative and Self-Confident in a World That’s Screwed. Fisher, Hutchinson, and Kristin Belka Maier (It’s Always Sunny in Philadelphia) currently have a show based on their podcast in development at FOX with The Tannenbaum Company and Lionsgate. 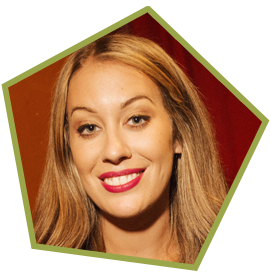 Krystyna Hutchinson is a stand-up comedian, writer and actress, originally from Doylestown Pennsylvania and a graduate of Marymount Manhattan College with a BFA in Acting.

Krystyna is a regular in the New York City stand-up scene and has performed in clubs, colleges, bars, basements, laundromats and sushi restaurants all over the country. She is half of the comedy duo, Sorry About Last Night, with fellow stand-up, Corinne Fisher. Together, they have produced a myriad of hit stand-up shows in New York City and Los Angeles, including selling out the Main Room at The Comedy Store, and wrote and starred in a two woman self-titled show at The Upright Citizens Brigade Theater.

CORINNE FISHER is a writer, comedian, and actor originally from Union, NJ. She first made her splash on the comedy scene with her critically acclaimed one-woman show CORINNE FISHER: I STALK YOU (Dir. David Crabb) which ran at The PIT in 2010 and was featured in Time Out New York. Her second stage show, ALMOST FORMER REALITY TV STARS, had a run at The PIT in June 2011 and told the true (albeit slightly exaggerated) story of how CORINNE and her real-life best friend, actor/model THOMAS WHITFIELD, were hired, then fired from their very own reality TV show. In 2012, CORINNE performed in a series of benefit shows for the AFGHAN WOMEN’S WRITING PROJECT alongside other comedians including SNL alum RACHEL DRATCH. Since 2010, FISHER has been a regular in the NYC stand-up circuit and co-hosts the popular late night show NACHO BITCHES with BLAIR SOCCI (MTV’s “Ladylike”) at New York Comedy Club. In 2014, CORINNE made her stand-up television debut on FOX’s Laughs and in the Summer of 2015 wrote and starred in a NYC Fringe Festival selection called THE COMEDIENNE PROJECT (Dir. TED ALEXANDRO) alongside KATIE HANNIGAN that challenged its leads to write and perform twenty new minutes of stand-up sans sex, dating, or relationship material prepared over the course of only three months. FISHER has been selected to perform in the highly competitive BOSTON COMEDY FESTIVAL, the WOMEN IN COMEDY FESTIVAL, the LAUGHING DEVIL FESTIVAL and the SHE-DEVIL FESTIVAL. CORINNE holds a BFA in Film & Video (Direction) from the School of Visual Arts, has been trained in the Stanislavski method by Joie Lee, and is a graduate of the Upright Citizens Brigade Theatre’s prestigious improvisation training program. She loves ice cream and the Spice Girls.